Gold is much like a 10-person lifeboat. It usually sits neglected as cruise line guests dance to Shakira. However, when small waves tip a few dinner plates, one or two guests climb on board.

But here’s where things get weird. Once the lifeboat draws 20 or 30 people, hundreds of others try diving for a seat. In their eyes, that 10-person boat provides safety in the storm.

Charles Mackay would have laughed. In 1841 he wrote, Extraordinary Popular Delusions and the Madness of Crowds. That title describes the rush into gold right now.

During stock market storms, it’s natural to look for havens. But that doesn’t make this smart. For example, people feared run-away inflation in the late 1970s, so hundreds piled into gold’s life rafts. They feared a collapse of the global financial markets in 2009, so they stormed the same vessels again.

You might be tempted to do that now. After all, COVID-19 has crippled many businesses. If a second wave comes, many more might struggle. Unemployment might soar and stocks could sink. Consequently, the rush for gold has seen its price soar. According to Morningstar, it increased 33 percent between January 1 and August 7th, 2020.

But before piling onto others in a golden lifeboat, inspect this vessel for the holes it always has.

Gold is also more volatile than stocks. For example, the price of gold declined during 18 of the 48 calendar years between 1972 and 2020. Over that same time period, stocks dropped just eleven times.

Sadly, gold disappoints when we least expect it to. For example, people clamored for gold in 1974. On an emotional level, that made sense. Stocks fell hard in 1973 and 1974. President Nixon faced impeachment. Cold War fears ran high. Inflation hit double digits. Much like today, investors piled into gold. Then gold plunged almost 30 percent over the next two years. Meanwhile, U.S. stocks gained 68.44 percent over the same time period.

In 1980, the United States hit a crippling recession. Once again, investors jumped into lifeboats that overflowed with people. If someone had invested $100 in gold in 1980, three years later, it would have plunged to $46. Meanwhile, U.S. stocks gained 53.79 percent over the same time period.

People feared government intervention and the results of quantitative easing. Even as stocks recovered, experts on television said stocks and the economy would plunge hard again. The well-worn opinion said, “We’re in a secular bear market. Protect your money now.”

Many rushed for gold’s overflowing boat. And its price went up, until it fell hard. If someone had $100 invested in gold at the end of 2012, it would have sank to $59 just three years later. Over this same time period, while talking heads on T.V. said, “This time would be different,” U.S. stocks soared 50.36 percent.

So let’s come back to 2020. Gold has risen once again. But according to Duke University Business professor Campbell R. Harvey and his fellow researchers, Claude B. Erb and Tadas E. Viskanta, gold has still lost to inflation after its price peaked in January 1980 and August 2011. Gold still records more calendar year declines than stocks. Gold still has a lousy long term track record. Gold still tempts investors….exactly when it shouldn’t.

So, what does this mean for you?

You might think you can jump into gold now, and then jump out at a better time. But that isn’t likely. Don’t fall for Extraordinary Popular Delusions and the Madness of Crowds. Steady your nerves instead. Build a diversified portfolio of low-cost ETFs. Ignore forecasts. Ignore investment news. Stay the course. Be patient. This is the recipe for long-term success. It’s far better, in fact, than jumping onto a golden boat. 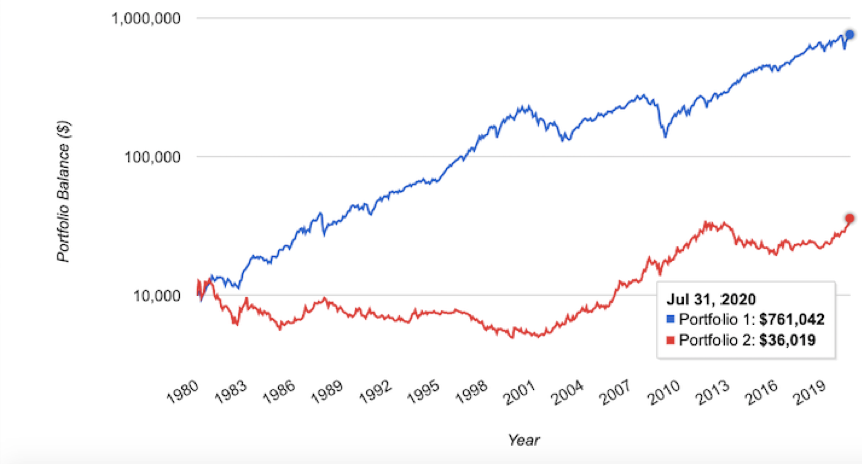 Andrew Hallam is a Digital Nomad. He’s the author of the bestseller, Millionaire Teacher and Millionaire Expat: How To Build Wealth Living Overseas

Please note the value of investments can go down as well as up, and you may not get back all the money that you invest. Past performance is no guarantee of future results.